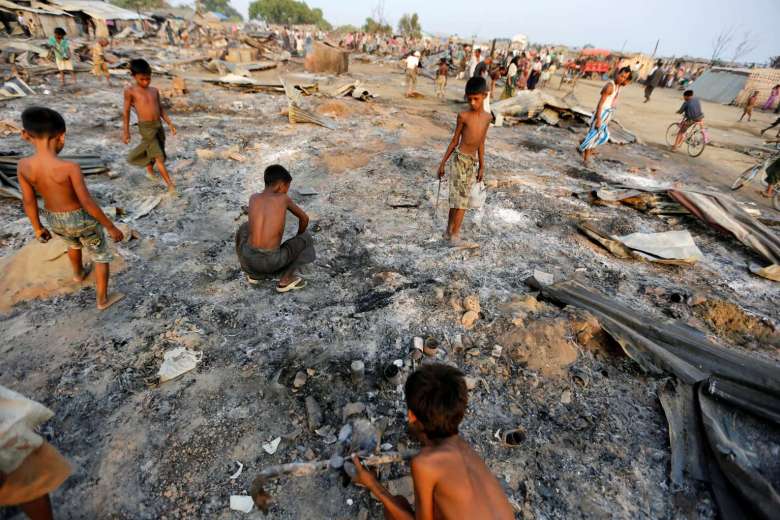 Boys search for useful items among the ashes of burnt houses after fire destroyed shelters at a camp for internally displaced Rohingya Muslims in the western Rakhine State near Sittwe, Myanmar on May 3, 2016. PHOTO: REUTERS

Published by The Straits Times on February 24, 2017

KUALA LUMPUR (THE STAR/ASIA NEWS NETWORK) – An international opinion tribunal has been set up to address crimes of atrocity against the Kachin and Rohingya communities in Myanmar.

The Rome-based Permanent People’s Tribunal (PPT) will be holding the inaugural session of its first-ever Tribunal on Myanmar at Queen Mary University of London’s International State Crime Initiative (ISCI) on March 6 and 7.

Subsequent tribunal hearings are expected in the United States and Malaysia before the jury reaches a verdict later this year, said the Malaysian Centre for Human Rights Research and Advocacy (Centhra) in a statement.

Founded in 1979 by an Italian senator, the PPT holds tribunal hearings like conventional courts would. Its verdicts are not legally binding.

“The establishment of this tribunal is in response to the requests made by Myanmar’s Rohingya and Kachin victims who have made credible allegations that their respective ethnic communities have suffered international crimes at the hands of Myanmar government troops, including crimes against humanity, war crimes and genocide,” said PPT’s secretary-general Dr Gianni Tognoni.

“The gravity of Myanmar’s alleged mistreatment of these ethnic communities has been a concern for us at the PPT for a number of years. My colleagues and I are glad to be able to respond positively to the victims’ request for a credible moral tribunal on what appear to be international crimes being committed by the government of Myanmar.”

The tribunal members are renowned genocide scholars such as Daniel Feierstein, past president of the International Association of Genocide Scholars; Dr Helen Jarvis, former public affairs officer at the Khmer Rouge Tribunal; and Dennis Halliday, former assistant secretary of the United Nations and winner of Gandhi International Peace Award in 2003.

Centhra said the tribunal was in the process of selecting members of the jury from among a list of public figures whose nominations are based on their established personal integrity, professional competence and concern for the victims.

It added that among the experts who will appear before the PPT are Dr Mandy Sadan from the School of African and Oriental Studies at University of London, Prof Penny Green of ISCI and Azril Mohammad Amin of Centhra.