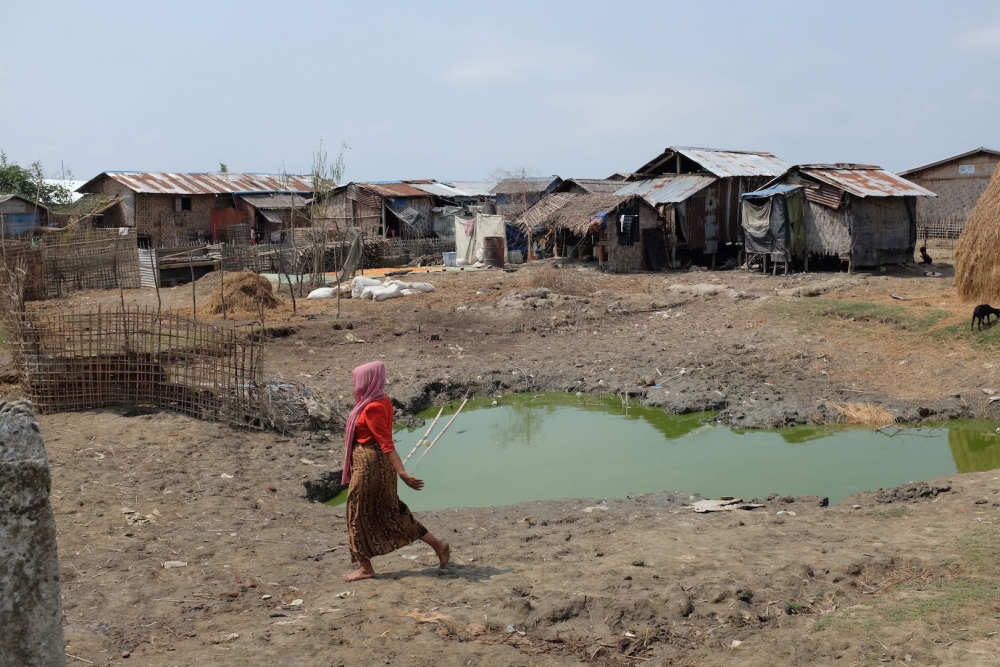 A camp in Pawktaw, Myanmar, for Rohingya displaced by violence in 2012. Sara Perria/IRIN

Myanmar security forces allegedly raped as many as 13 women during “clearance” operations following an explosion in May that was reportedly detonated by ethnic Rohingya insurgents, according to rights groups and witnesses.

Activists and witnesses tell IRIN that the assaults took place in Buthidaung Township in Rakhine, a western state where security forces are accused of abuses against minority ethnic Rohingya Muslims. The UN estimates that about 75,000 Rohingya fled to neighbouring Bangladesh after the military launched counterinsurgency operations following deadly attacks on border police posts last October by a new group calling itself the Arakan Rohingya Salvation Army.

The state-run Global New Light of Myanmar newspaper reported that the bodies of five men were discovered after they were apparently killed on 5 May while trying to build improvised explosive devices. The bodies were found, along with bomb-making material, when “security forces conducted an area clearance”.

During those clearance operations, soldiers allegedly raped between five and 13 women on 9 and 10 May, according to Chris Lewa of the Arakan Project, an advocacy group with an extensive network of contacts in Rakhine State, where most of Myanmar’s approximately one million Rohingya live.

“Our sources say this occurred in north Buthidaung Township following an explosion, which was attributed to the insurgency,” she said. “It seems this was retaliatory.”

Andrew Dusek, a spokesman for the UN refugee agency, UNHCR, said the UN has received reports of this and several other “concerning allegations of such incidents” in Rakhine during the past few months.

“They have been brought to the attention of the government,” he said.

The government has in the past flatly denied that soldiers killed and abused Rohingya civilians, and it says it will not allow a UN fact-finding mission into the area to investigate. But Myanmar is facing increasing international pressure, and officials say that they are instead depending on the government’s own commission to assess the claims.

“We are not rejecting the allegations,” said Zaw Htay, a government spokesman. “But we need to collect data and information for the investigation commission, which is headed by Vice President U Myint Swe, which is doing the job of investigating human rights allegations and other media reports.”

IRIN has obtained video testimonies from people who say they witnessed the assaults. Their names are being withheld for their protection.

One witness said she was “too shy to say” exactly what happened to a woman she saw severely sexually assaulted, but she provided more detail on attacks by security forces on two others.

“A woman’s blouse was removed and her chest was grabbed. They kicked her and injured her,” said the witness, adding that another woman “was stabbed with a knife and bled.”

A separate witness said her daughter was ripped from her arms by security forces.

“The police pulled at us and my daughter was taken away,” said the woman. “When I tried to prevent this, I was beaten.”

The witness said she watched another woman being severely assaulted after pleading with security officers to release her daughter-in-law.

“They beat her on the head with a gun and stabbed at her with a knife,” she said in the video testimony. “They cut and removed her clothes.”

SEE: Myanmar says Rohingya rape and abuse allegations “made up”, despite mounting evidence

Such allegations are impossible to verify, because the military refuses to allow journalists free access to much of Rakhine State. But the assaults would fit a pattern, documented over decades by rights groups, of sexual abuse perpetrated by the military in areas where it is fighting ethnic insurgents.

Aung San Suu Kyi, who was awarded a Nobel Prize for her pro-democracy struggle against Myanmar’s military, condemned the practice in a 2011 video address to a Nobel Women’s Initiative conference just months after her release from house arrest.

After 49 years in power, the military initiated sweeping political reforms in 2011, and Aung San Suu Kyi’s National League for Democracy party swept national elections in November 2015. Although the military-drafted constitution bars her from the presidency, she today serves as state counsellor, Myanmar’s de facto civilian leader.

In her new role, Aung San Suu Kyi has not only refused to speak out against sexual violence committed by security forces against Rohingya; her office has repeatedly issued statements denying such attacks. Her government says its commission has found no evidence of widespread violence, ethnic cleansing, or rape against Rohingya civilians.

The UN’s rights envoy to Myanmar, Yanghee Lee, told IRIN In February that the commission was incapable of carrying out a “credible” investigation. She spoke a week after the UN Office of the High Commissioner for Human Rights issued a report based on testimonies from 204 Rohingya in Bangladesh who said they fled as soldiers committed atrocities including killings and gang rapes, which likely constituted crimes against humanity.

In the wake of that report, and others by rights groups, and media, the UN Human Rights Council announced in March that it would dispatch a fact-finding mission. Myanmar’s Foreign Affairs Ministry immediately rejected the mission and said in a statement that it “would do more to inflame, rather than resolve the issues”.

But these new reports, provided exclusively to IRIN, of the rape of as many as 13 more women this past May indicate that abuses of Rohingya civilians continue, despite the government’s claim in that statement that it is “fully committed to the promotion and protection of human rights”.