Myanmar’s Persecution of Rohingyas as a group is BOTH ethnic cleansing and a genocide. Here is why, and how

What we have been witnessing in Myanmar’s nearly 40-years of mistreatment – an understatement – parallels more with the Bosnian case (Srebrenica is only the most infamous incident of direct killing of about 5000 Muslim men), which was both ethnic cleansing and a genocide.

(As a matter of fact, Turkey’s Armenian genocide may be the first in the modern recorded history of genocide. The Turks used forced eviction and forced marches of Christian Armenians scapegoated for the collapse of the Ottoman Empire and seen as the local proxies for the Christian imperial West – like Rohingyas as “proxy terrorists” for foreign Islamicist movements funded by Saudi and others.

When the Armenian death rates – from marching across the Kurdish desert – were deemed disappointing or did not meet the anticipated result, that is, too many Armenians were not dropping dead fast enough for the Turkish perpetrators, the Young Turks switched to machine-gunning them down in the desert.

Here is the Burmese parallel:

If the Burmese borders are closed off or out-migratory routes are tightly controlled for the Rohingya as a group to escape the deliberately created miserable conditions – and if the perpetrating Myanmar government does NOT make a plan to ship the Rohingyas out then the only predictable outcome is slow death of Rohingyas – 80,5000 children included – as the direct result of this food deprivation.

In that case of “trapped population of Rohingya” dying, the gov’s INTENT can be established as GENOCIDAL.

Read a proper LEGAL reasoning here by someone who is legally fully qualified on this:

Some of us have maintained, based on the mounting evidence, historical and contemporary – consistently that the genocidal intent has been present from the get-go, that is, from the moment the Burmese military leaders decided that the Rohingya population – not just a few individuals with militant views – pose a threat to Burma’s national security as early as Feb 1978 – of the infamous Nagamin (King Dragon) Operation, centrally planned from Rangoon, with 200 interagency-operatives executing the plan to drive out the targeted Rohingya GROUP as such (from Religious Affairs, Customs, Immigration, General Administration Department, police intelligence, justice department, military intelligence and infantry and naval units of the Ministry of Defence).

Like KKK in the American South who were part of Southern States’ admin, justice and law enforcement agencies, local Rakhines overwhelmingly make up local security and admin units in Rakhine state. This is THE INTERFACE between communal aspect AND state centrality in attempts to drive out Rohingyas – AND destroy those who cannot run.

“Many are concerned that the food shortages are purposeful in an attempt to weaken the Rohingya populace by cutting food supplies to the divisive area. Roberts added that the foundation of the issue stemmed from a desire to rid the location of ethnic Rohingya.

“At the core of this whole situation is the reality that the Burma government and military want the Rohingya to go somewhere else, and they are prepared to make their lives as miserable as possible to accomplish that,” he (Phil Robertson of HRW-Asia) said, alluding to the need for humanitarian aid in the region.” 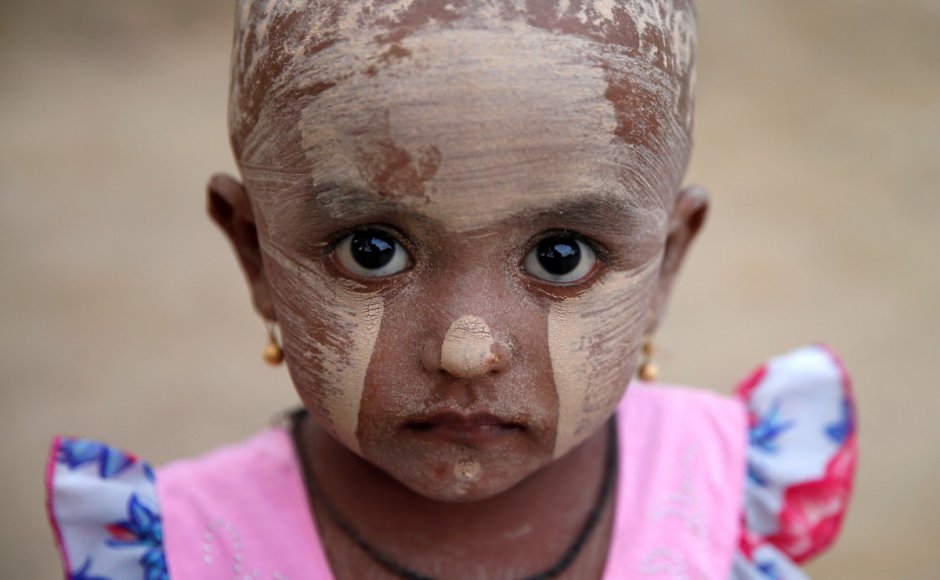 A girl wears thanakha powder on her face in a Rohingya refugee camp outside Kyaukpyu in Rakhine state, Burma, May 17, 2017. Source: Reuters/Soe Zeya Tun

SEVERE food shortages are intensifying an already insecure and vulnerable part of Burma (Myanmar), leading to a worsening humanitarian plight for its predominantly Rohingya population.

According to a new report by World Food Program (WFP), starvation, malnutrition, and a desperate lack of access to food is plaguing the restive Rakhine State. The current food vacuum has left over 225,000 in search for a diminishing amount of food that is left.

The heavy food shortage is taking place in Rakhine State’s northern Maungdaw and Buthiduang, locations known for bursts of violence, driven by a tumultuous ethnic tension that has proven unstable. The zone is heavily controlled by the presence of an authoritarian security force, Tatmadaw, known for restricting and persecuting the 90 percent majority populace of ethnic Rohingya.

Famine is an exasperating new element in the region, a component that will undoubtedly affect the social crisis that already afflicts the area.

While many complex variables affect the location in terms of poverty, it is clear what has led up to the current hunger crisis.

Without the freedom to move throughout the area, thousands of Rohingya are left unable to find sustainable means of work to provide for themselves and their families. 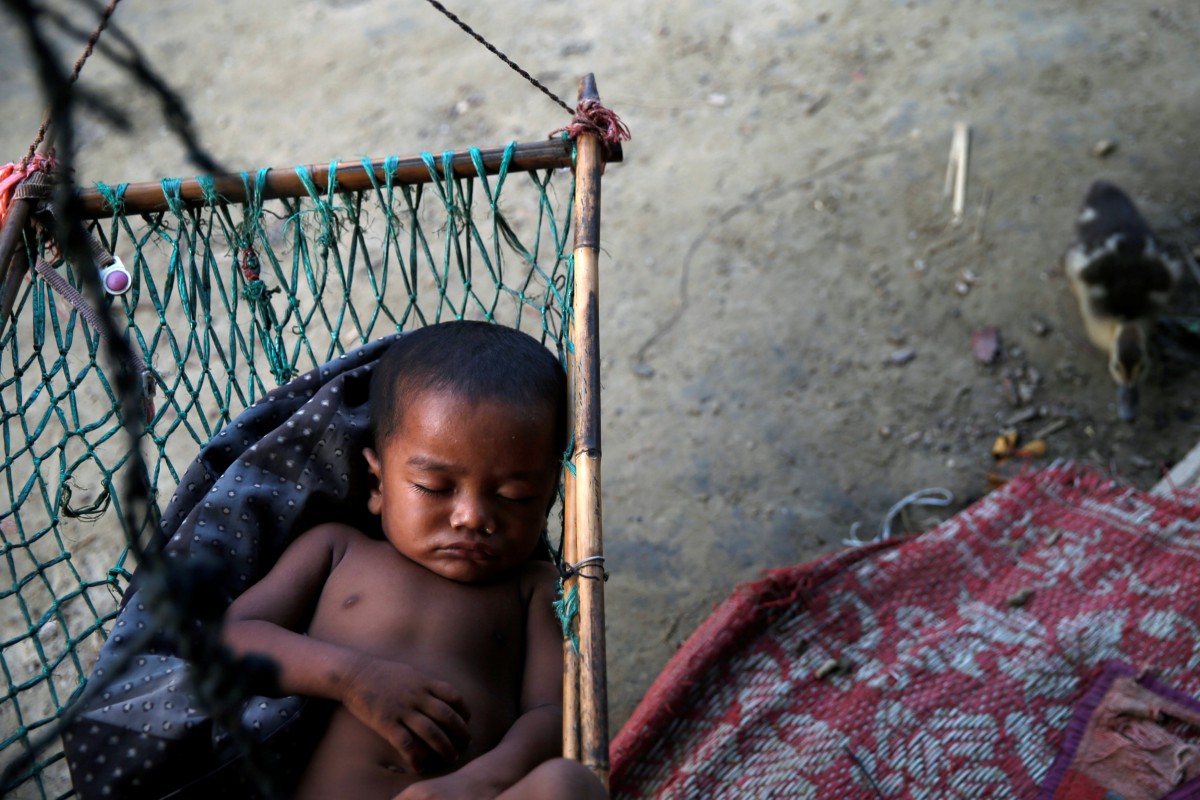 A boy sleeps in a hammock inside a Rohingya refugee camp outside Kyaukpyu in Rakhine state, Burma, May 17, 2017. Source: Reuters/Soe Zeya Tun

“The biggest issue is that the Rohingya are locked down by severe restrictions on their right to movement.

“If they cannot leave their village without permission, and face numerous security roadblocks where police abuse their rights and extort them, they have little opportunity to earn a livelihood, farm fish, collect firewood, or undertake other activities that would enable them to have some degree of food sufficiency.”

WFP has found that Maungdaw is ranked as one of the worst locations in terms of food security in Burma. The study found that close to two-thirds of households in the township are not able to acquire an adequate amount of food to sustain a proper diet.

More so, limited access to essential services such as healthcare, and an inability to access potable water and sanitation, have also exacerbated the state of the hunger crisis.

Around a month before the survey was conducted across Maungdaw, locals admitted they faced even worse food depletion that caused severe hunger, with most survey respondents going over a day and night without food during the time period.

Tragically, children are at the most risk of life threatening outcomes from a dangerously inadequate diet. For obvious health and growth reasons, food insecurities are much more harmful for children—who in the area are now at threat of severe malnutrition.

The study found that every single child surveyed experienced an inadequate diet, raising the number of malnourished children to approximately 80,500.

Many are concerned that the food shortages are purposeful in an attempt to weaken the Rohingya populace by cutting food supplies to the divisive area. Robertson added that the foundation of the issue stemmed from a desire to rid the location of ethnic Rohingya.

“At the core of this whole situation is the reality that the Burma government and military want the Rohingya to go somewhere else, and they are prepared to make their lives as miserable as possible to accomplish that,” he said, alluding to the need for humanitarian aid in the region.

“This is why there needs to be an impartial, independent investigation of abuses, like that authorised by the UN Human Rights Council in the form of the fact-finding commission, which Aung Sang Suu Kyi and her government are now blocking from entering Burma.”

Since the violent crackdown last October, the Burmese army has made life even more difficult for the close to one million Rohingya living in Rakhine.

Immediately following the clampdown, thousands of Rohingya fled to neighbouring Bangladesh in hopes of escaping the violent realities that were occurring to their neighbours, friends, and families in Rakhine state.

Since then, newly-appointed Burma leader Suu Kyi has for the most part remained quiet or impartial regarding the gradual, yet steady abuse of rights to the Rohingya populace in the Maungdaw area.

In interviews, she has dodged acknowledging the many rights abuses that have, and are still taking place inside Maungdaw.

For years, the Rohingya have become subject to varying degrees of suffering, from being denied citizenship, to freedom of movement, to rape and murder on a scale that many claim is genocidal in scope.

As the situation continues to devolve, with 225,000 that are in an imperative need for humanitarian assistance, the pinnacle of concern falls on children under five.

As according to the report, this young age group is at the most danger of severe malnutrition and hunger leading to dire consequence.

“International humanitarian agencies need to be provided with unfettered access to all areas of northern Rakhine state to do what they do – provide food and services to keep people alive. The Burmese military and government need to step aside and let the professionals do what they do, and save lives.”